Born on the 28 of March, 1979 in a small city in the “middle of nowhere” Canada, Sarah began her anagogic journey into art at a young age, an attempt to find some form of belonging and expression in an otherwise limited and awkward environment. Art – in any form – became the outlet for a shy and strange child who transcended and morphed into an introverted, pleasantly strange woman.  By the late 1990s, Sarah immersed herself into the underground, taboo art scene of tattooing, battling and carving a way for herself in a time when female tattooers where not common, let alone respected, full of unapologetic determination, passion, total naïvety, and absolutely terrified. She became an internationally known artist and shop owner, which she continues to nurture and love to this day.

In 2006, Sarah began studying Interior Design in Vancouver and Toronto, with yearly honours as one of the top students. This lead to work directly with teachers and firms throughout her four years of study. All the while, she continued to tattoo around the world and soak up the experiences that have transformed and inspired her life, and thus, her artworks. During this time, Sarah developed a special affinity for sculptural, larger scale installation art. She has done small scale interior design projects, primarily focusing on restoration of interiors, and antiques. There is a unique vision held within a space that Sarah has a natural direct line to; inside spaces are here domain – vision and possibility are endless. It is an unbearably natural and effortless endeavour creating a space.

By 2010, Sarah relocated to Berlin, Germany to continue tattooing, run her own shop, and to begin the personal expansion of her artistic forms that had been beckoning her for many years. Her art – in all its incarnations – is an avenue of self exploration, a release from the bondage of normality and exceptions, and a means to create and foster unrelenting curiosity, ingenuity and total freedom of artistic expression. This lead to the opening of Altered Space Gallery in 2020 as a direct means to exercise and refine this unique skillset of multidisciplinary artistic ability and passion, to create a space to show her ideas and works and to have the faculty to see her concepts transubstantiate into alternative realities. In this, she also supported and encouraged unknown artists (primarily musicians) to have an opportunity to showcase their works along side her, to bring about a sense of community, and showcase talented people at a collectively challenging time. After this endeavour, in 2022, Sarah began an art sabbatical in the south of Portugal to focus solely on painting full-time: the creation of Series 1 and 2.

Having a background in tattooing and design has allowed for oddly specific details to come through in her current paintings. Somewhat painfully accurate symmetry, reminiscent of kaleidoscopes or LSD, with bold and somewhat brave colour choices that has the ability to allow your eye to travel down her desired path. Reoccurring themes of animals and arms, skulls and geometrics are a direct genuflection to her long career in tattooing. She is taking these somewhat normative designs and constructing them into something more dreamlike and confusing, not dissimilar to the artist herself. Held within the bright colours and subtle hints of death and rebirth is a child-like subconsciousness to each of the artworks – that can hold well on its own hook, but collectively, tell a narrative of hallucinations, disorientation and joy; there is a desire to not pin down a specific definition, which allows for imagination and a gentle playfulness to come forward in a rather precarious world. Each painting tells a story of some aspect of Sarah, but disguising her full story. 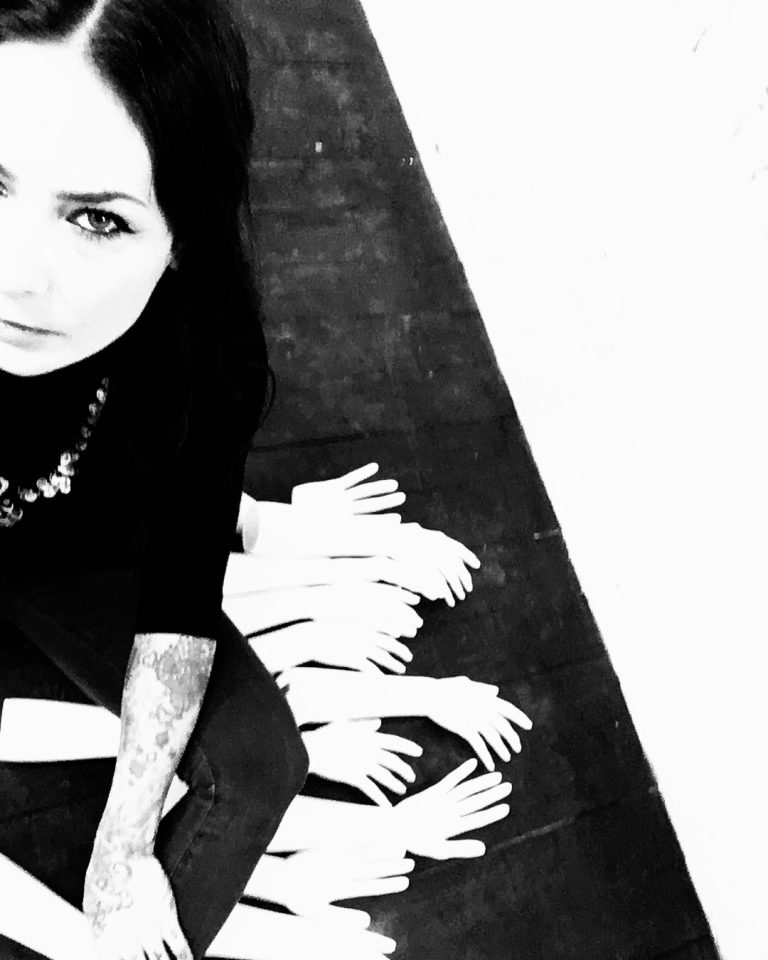